Geology is Everywhere: The Story of Northfield, Minnesota

Science is an incredibly useful tool to improve
our lives and learn about the world around us, but it can also change our perception
of our place in the universe. There are many amazing stories science can
show us: Stories about strange places, far away and from times long gone. In astronomy, these stories are written in
light. Light travels trillions of kilometers to reach
our eyes and our instruments. In geology, the evidence is more down to earth. 4 billion years of rock records exist on our
planet, but in any one place, only scraps of time remain. For over two centuries, Geologists have been
putting these pieces together. Every place has its own part of a grand story
to tell, written in the ground below. In some places, the impact of geology is obvious,
by volcanoes, mountains, and canyons, but even seemingly unremarkable places have deep
histories. Let’s take a look at Northfield, Minnesota,
a town of twenty thousand that houses two colleges, including mine. The landscape is fairly flat, and fairly unremarkable
at first glance. But looks can be deceiving, For this place
has seen Fire, Water, and Ice. Our story begins 1.1 billion years ago, in
the Proterozoic Eon.

Life existed back then, but it was mostly
microscopic, animals would not evolve for hundreds of millions of years. It’s difficult to reconstruct continents
this far back, but the earth looked something like this. Do you recognize any continents? I can’t blame you, the modern continents
have not yet assembled, and are all scattered across the world This is Laurentia, the core of what will one
day become North America.

1.1 Billion years ago, something changed in
the flow of superheated rock from below the crust. A magma plume came up in the center, and convection
currents tugged at the continent from each end. And slowly the continent began to rip. The rift failed as the magma plume subsided,
and the pressure was alleviated as a new ocean began to form between Laurentia and Amazonia. But It left behind a 3000-kilometer long scar
of volcanic rock that today, stretches all the way from Oklahoma, up to Lake Superior,
and down again to Alabama. Today, most of this rock is deep below the
ground, and can only be detected by gravity anomalies or by deep core drilling. But along the shore of Lake Superior, these
rocks are at the surface. They include Rhyolites: which come from volcanic
ash, Basalt which comes from Lava flowing out of volcanoes, and gabbros and granites,
which form from Magma deep below the ground. The gash passes through Northfield too, but
the rocks are still deep below the ground. Here the surface rocks aren’t volcanic igneous
rocks… they’re all sedimentary rocks, like limestone,
sandstone, and shale.

Inside this rock you can often find fossils,
not of dinosaurs, but of sea creatures, some familiar, and many strange. How did these fossils get here, when we’re
300 meters above sea level and over 1000 kilometers away from the ocean? These rocks are less than half as old as those
igneous ones, only 455 million years old, they come from a period called the Ordovician. This was 220 million years before the first
dinosaurs, and The Earth was very different back then. Despite the sun being slightly dimmer than
it is today, the planet was two degrees warmer, due to there being ten times as much Carbon
dioxide in the atmosphere. Because of this, there were no polar ice caps,
and only patches of ice in the south, so the oceans were 200 meters higher than they are
today.

Much of what would one day become North America
was covered in a shallow sea from the south including Northfield. Why was there so much Carbon dioxide? One of the reasons was there were no forests
yet. Plants had just started to colonize the land,
and trees had yet to evolve. There were no land animals either. Instead, most life was in the oceans. Multi-cellular life was thriving like never
before. Where once bacteria colonies built reefs,
animals, like sponges and corals, had largely taken over. Shelled animals emerged, crystallizing minerals
from the water around them. When they died, their hard remnants fossilized
much easier than the soft-bodied creatures that came before them. Shallow seas are where most sedimentary rocks
are formed, anything washed out into the deep oceans is usually lost since the entire ocean
floor is replaced with new magma every 200 million years. 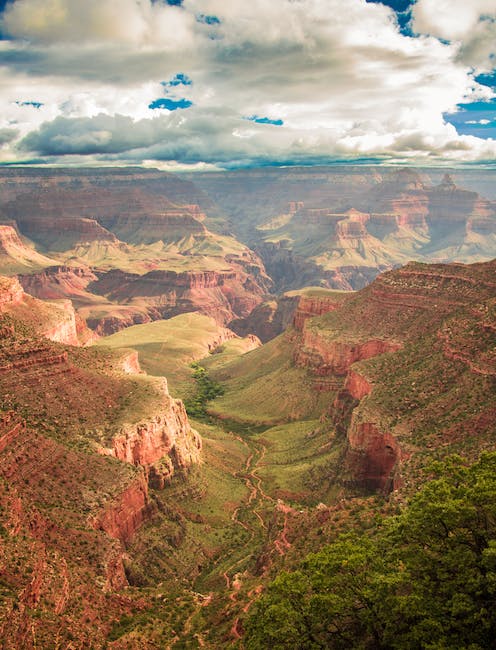 But how exactly do you get new sedimentary
rocks? Older rocks are broken up by weathering and
erosion, and then washed away and sorted by the motion of the water. When a river meets a slower moving body of
water, like the Mississippi flowing into the Gulf of Mexico, The Cannon River meeting Lake
Byllesby downstream from Northfield, or an ancient river flowing from the mostly barren
land into the sea half a billion years ago. it forms a delta. As the water slows down, sand, the largest
type of sediment commonly carried by rivers, is deposited first, closest to the outlet,
forming sandy banks and shores. As the water slows down more, it begins to
drop finer and finer sediment: Silt is next, followed by the microscopic pieces that make
up clay. If they are buried and put under pressure
these eventually form Sandstone, Siltstone, and Shale. In certain regions where there is ample sunlight,
reefs and sea creatures abound, when they die they leave behind shells full of calcium
carbonate that litter the seafloor, these eventually turn into limestone. In most of Northfield there’s soil over
the limestone… but there’s something else too.

Unlike sandstone, this sediment is barely
held together And it’s full of larger pebbles, and cobbles Larger deposits are dug up by gravel quarries,
the stones are sorted by size and then sold for paving rural roads, and creating concrete. This rock does not belong here, it’s igneous,
like the ones found along the north shore that were created a billion years ago. So either they were brought up from far below
the surface… or they’ve been carried hundreds of kilometers from up north, but what could
possibly do that. Rivers with strong currents can move cobbles,
but there’s a problem with this hypothesis. River deposits have layers with rocks sorted
by size as the currents change. Some of these gravel deposits show features
like this, but some don’t, and many of the pebbles aren’t smooth like you’d usually
see in a river, but are jagged shards.

In Northfield, we’re just on the edge of
where the glaciers came in the last glacial period, twenty thousand years ago. Continental ice sheets up to 3 kilometers
thick covered most of Canada, with giant glacial lobes extending down into the United States. As glaciers move, they scrape and pick up
pieces of the rock they encounter, and eventually dump them at their ends in structures called
moraines. The meltwater rivers from the glaciers sorted
some of these rocks, but not all of them. There are hundreds of bands of this glacial
till, from when glaciers came and went in the dozen or more glacial and interglacial
periods of the two million year long ice age we still live in today.

While Northfield seems quiet now, Geologic
change is still happening here today: North America is moving west at 2 centimeters
per year, widening the Atlantic and narrowing the Pacific oceans. Soil began eroding away much faster after
most prairie and forest was turned to farmland in the last 200 years, which in turn has affected
rivers, and floods are becoming increasingly common. As with every science, ideas are constantly
being refined, and there are still many secrets to discover.

So stay curious, and keep looking up… and
down..