Translator: Mhd. Fady Tootoonjy Auditor: Abd Al-Rahman Al-Azhurry In the year 1816 After Europe and North America passed A series of devastating wars She seemed to be recovering slowly However, nature had other plans After two years of lack of crops Spring came with strong rain and very cold This led to flooding of rivers and damage to crops From the British Isles to Switzerland. While strange snow came in (Italy) and (Hungary) Hunger, riots and epidemics ensued Meanwhile, he covered New England. Strange haze Don't settle The earth also remained frozen Until the month of July In what has become called: "The year in which there is no summer" Some believed that the end of the world had begun Lord Bayern expressed this situation in his poem "Darkness".

"I saw a dream that was not a dream at all. The rising sun went out, The stars darkened in eternal space, Without beam or road, And the frozen earth became blind and dark, In uncontrolled air; Dawn came and passed, then came, and did not bring day. They could not know That is the true cause of their misfortunes It happened a year ago thousands of miles away This was the eruption of Mount Tambora volcano in 1815 On Sumbawa Island, in Indonesia.

In what is known as the "giant volcano" Which is characterized by the amount of substances it releases, Which is twice as high as regular volcanoes. Although a common picture of volcanic destruction Is the molten rock that sweeps the surrounding land, However, it causes much more damage It is what stays in the air Volcanic ash spread by wind It can cover the sky for days, While toxic gases react As sulfur dioxide, in the atmosphere So sunlight is blocked The air is very cooled Volcanic winter that results In addition to other effects, such as acid rain Can affect many continents, Disrupt the cycle of nature It kills plants that other organisms depend on Including man About 160 cubic kilometers were launched From rocks and gases It was the eruption of Mount Tambora The largest eruption in history It caused no less than 90 thousand deaths. However, volcanic eruptions have already caused more death As it is likely that the eruption of (Huainapotina) volcano in (Peru) in 1600 May cause starvation in Russia. That killed about two million people It is also attributed to older eruptions, causing major world events Like the fall of the xia dynasty in china The disappearance of Minoan civilization And even hindering the genetic development of humans That may have resulted from humans, of whom only a few thousand remain After most of them were destroyed 70,000 years ago. 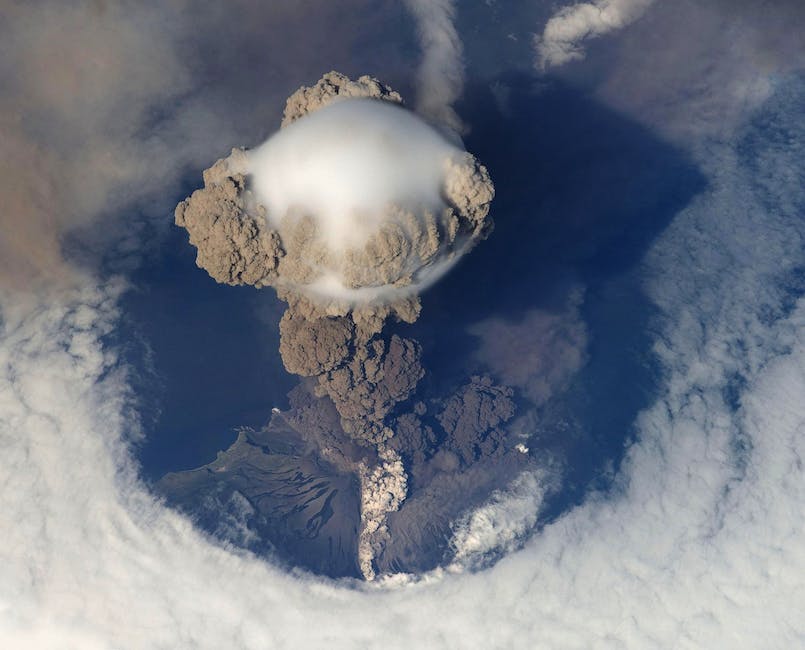 One of the most dangerous types of huge volcanoes She is the explosive caldera That form when a volcanic mountain collapses After a large enough eruption To make the magma room empty Unable to carry her weight But despite the disappearance of the volcano on the surface of the earth However, volcanic activity continues underground. Without a way to empty, Magma and volcanic gases continue In accumulation and expansion below the surface of the earth The pressure builds up until the explosion is large and violent It is inevitable. One of the largest active cadars is located Under the Yellowstone National Park. And the last time it erupted was 650 thousand years ago It covered most of North America About two meters of ash and rocks. Scientists are currently watching Active volcanoes in the world, The procedures for predicting eruptions have also evolved And evacuations of the population, changing the course of the lava Through time.

But the scale of the massive damage and the ability of giant volcanoes To make an impact on a global scale It means that many will not find a place to escape. Fortunately, the current data shows no indication On the occurrence of such an eruption in the next few thousand years. But the idea of ​​a catastrophe is inevitable and unexpected It leads to the destruction of an entire civilization It is caused by events on the other side of the globe It will remain a powerful and terrifying vision It is not just imagination as we like to believe. "The wind stopped in the stagnant air, The clouds faded Darkness did not need their help It was the entire universe.