(Opening Music) Welcome back geology fans! Today we
imagine you have completed your background investigations and gotten
your gear together for your trip, and now you've touched down on your site of
investigation. What should be your next steps and how should you conduct
yourself to ensure safety and good data collection? There is no set list of steps
to follow as each location may have to be approached in novel ways, but you
should have your general strategy mapped out before arriving in the field. Be
prepared. Your strategy may or may not involve some of the concepts we will
discuss here, but these ideas are valid in most cases. I previously suggested
viewing the HBO episode of From the Earth to the Moon on the Apollo 15 mission
called "Galileo Was Right".

A lot of what I'm going to talk about today is covered
in that episode, and that is no mere coincidence nor plagiarism. Lee Silver
was the Caltech geologist featured in that episode, but it should be no
surprise that there were a team of geologists in the field training the
astronauts, and anyone who knows anything about the geology of the Apollo missions
knows the name Bill Muehlberger; a geologist I first encountered as an
undergraduate student at U.T. Austin. He was my most influential field geology
instructor there, and I hear Bill in that film telling his students to get to the
high ground to get the big picture first, to note the usual suite of rocks, but to
keep an eye out for the unusual one. Always keep an eye on the context of
each individual rock, and be sure your notes are so detailed that some other
geologists could read it and know exactly what you meant, for one day you
will be that other geologists wondering what your vague scribblings meant 30
years ago.

Let's start with what you put in your field notebook. Details, details;
yes you need to note the details. This includes where you are both physically
and emotionally. Start each mission with a general header of location and goals,
but each day of the mission should probably start on a new page with the
date mission goal for that day, the weather, and how you're feeling. Are
you full of energy and ready to go, or are you sick, or even worse hungover or
otherwise affected physically or emotionally? You are the filter through
which the data comes, so, geologist, know thyself. Be suspicious of data taken
while feeling sick or rundown. Focus on data from the good days, which you'll
have more of if you've gotten in shape for your excursions in the weeks before
you get out to your study site.

A general rule is to get the big picture first, and
then work down into the details. In the old days, this usually meant climbing up
to the highest point to get a good view. But today we have airplanes and
satellites and Google Earth, which you should have already looked at before
getting to your field site. So you may be able to skip hiking up to the highest
point if you feel you have that scale of the big picture down already. These days
I use drones to get a good overview of a field location, and to do some other
types of mapping like high-resolution 2d images, so-so vegetation maps, digital
elevation maps (which we call DEMs), and 3d maps of the site.

The principle of
getting the big picture first holds at many scales. So, for example, if you
were approaching a rock outcrop, you want to start by looking at it from a
distance in its context, then moving in closer to get details. This means if
you're at a road outcrop, you might have to start out standing on the opposite
side of the road and maybe ask yourself the following questions, which you could
also ask yourself during your pre field preparation research. Is there one kind
of rock or many kinds, and do the various rock structures look as if they continue,
or once continued beyond the edges of the visible rock outcrop, or do they end
suddenly within the outcrop.

And if they end suddenly; against what? Can you tell
if the rock is truncated by a fault, an unconformity, an intrusive cross-cutting
feature? Turn your attention to the edges of the outcrop. Does it end suddenly or
grade into the soil or rock debris, and do you think that you can see why the
outcrop ends where it does? Do you think you can tell what kind of
rock it is from the fact that sedimentary rocks are usually layered
and tabular, while metamorphic and igneous crystalline rocks have a more
massive or jointed appearance. Sketch the various rock bodies you see and note how
they control the shape of the outcrop itself. Try to discern both from a
distance and as you get closer the nature of the boundaries between the
different rock units.

Are the contacts gradational or sharp, and do they cut
across any prominent patterning or grain in rock on either side of the boundary?
Does the color or any other prominent feature change in either of the rocks
approaching the boundary? If the rocks are layered, describe layer thickness,
lateral continuity, internal structure that is or is not parallel to the
bounding surfaces (the bounding surfaces means the main bedding planes of the
layers). Remember that distinguishing bounding
surfaces from cross bed surfaces is very important when you measure cross bedded
sediments. Keep asking these questions and see if any of your answers change as
you approach the outcrop. What was the color or any other feature from far away
and as you approach? When finally up against the rock outcrop, collect samples
from the various rock bodies and any other variable parts. Sometimes you can
just scoop some up or pluck it by hand, but this is often where the hammer comes
in. Listen to your hammer hitting the rock. Does the rock crumble or crack? Does
the hammer hit with a thud of softer rock like shale, or ring like a
metamorphic or igneous crystalline rock. I often say I don't do geology from
pictures as it robs me of four of my five senses.

Don't forget to smell that
rock for sulfur or petroleum, taste it for salts, or see if that clay or bone
sticks to your tongue. Feel its texture and weight. Experience your field site in
every way you can, and pay attention to what you're sensing, be it the typical or
the unusual. And while listening to the sound your hammer makes on the rock, go
ahead and break it. Geologists are one of the leading causes of mechanical
weathering. The outside of a rock is it's weathering rind and you
to crack it open to see it's fresh original face. Rocks are
like children; they lie, so we beat them, and then they tell the truth. 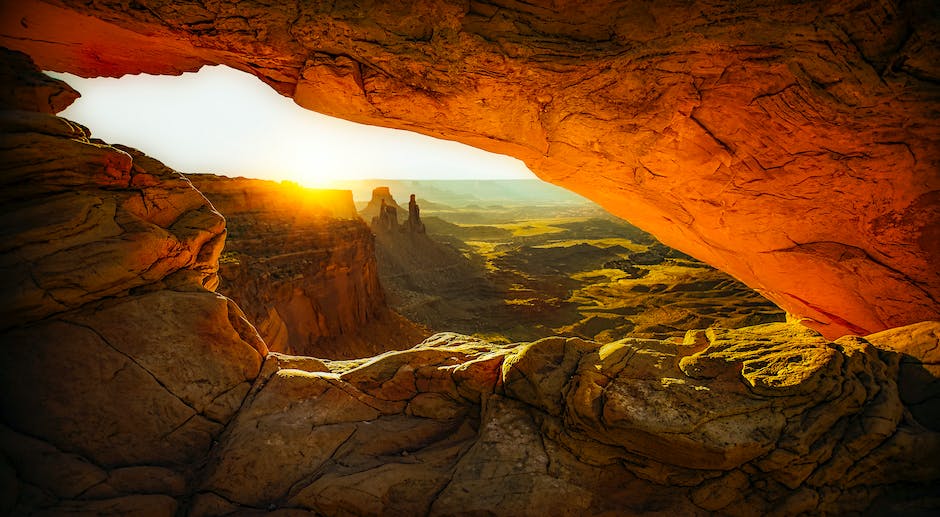 Use that
hand lens to get details on both weathered and fresh faces. Try some
hydrochloric acid to test for effervescence, or even put some water on
to clean the rock surface ,or see how well the rock absorbs the water. Start
noting all you can, or at least all you think is important. This could be overall
rock weathering or mineral alteration, porosity, grain size, and all those other
primary and secondary sedimentary features we mentioned earlier in this
series, crystal size, any fabric (that is preferred direction to the crystals or
grains). And, if you can tell mineralogy, try to estimate percent volume of the
various minerals in the rock. Give the best guess to the name of the rock
getting as specific as possible.

Are there any signs of deformation in the
rock at all? Maybe you saw some folding from a distance, or maybe you can only
see signs of deformation as you get in closer. Measure faults and joints.
Specifically note major faults and principal fault and joint directions.
Minor faults are also noted, as with their spacing an individual throw (throw
being the distance the rocks on either side of the fault moved relative to each
other). If you find a nice sample you want to collect, sample bags come in handy.
While collecting samples, don't get too focused on the odd outliers. Collecting
samples of the typical can help you back at camp or in the less inspirational
office as well.

Getting a good idea of the typical lets you better see the
unusual. You'll get really good at noticing the unusual rock and often
calculate the weight / distance to base / energy / and water left, to tell if you're
gonna haul it back or just take pictures. And if you take pictures, taking notes
about these pictures so you can properly identify them later. Rocks can be really
heavy so don't misjudge and carry something a kilometer or more that
you're just gonna drop later in the day, thus wasting energy.
Since most rocks you'll be interested in will be too large
to carry, break-off a smaller piece, or draw and take pictures with notes of
location, direction you are facing, and details, and context.

I am no artist,
that's for sure, but practice sitting down a distance
from a rock outcrop and drawing in every detail you can. You might be surprised.
And if you're not the fossil whisperer, as I am NOT, nor most of my colleagues,
draw or take a picture and send that to your paleontologist buddy to identify
for you, or refer to a handy reference book.

Once all these issues have been
noted, and you're still out in the field, this is a good point to pause and go
over all your notes so far and congeal your ideas. Now you may have a good idea
of what more specific observations and notes you may want to take, also keeping
in mind how much more ground you want to cover and the time that you have. So
let's say you've wrapped up at your first rock exposure and are ready to set
off of your next exposure. Don't consider a path to the next goal useless ground.
You shouldn't have to come back to an area you've already covered, so if you
see something of interest or something you can measure as you're walking
between point A and point B, put it down in your book and map it while you're
there.

Be consistent in how you measure, don't drop your guard, and be confident
as well. Do not be shy to ink your map in the field as it is the best place to do
so. The hotel or tent that night is seriously inferior, though that's orders
of magnitude better than back in the office a week later. Again, be a confident
geologist. Never say "I can't" but "I will try" or "I can't yet". After all, you're
smart and determined enough to be watching this series, so please don't be
hesitant to commit to your mapping in the field.

It is the best place to do it,
and don't expect any angels of enlightenment to come down on you later.
But to put another angle on enlightenment, we're going to look at how
to use what is known as a Jacob's Staff, and measuring rock sections in
constructing stratigraphic columns, when we come back next time, here on Earth
Explorations!.